The fifteen seconds between the flashing of the Dimension Films logo and “SCREAM” landing hard on the screen perfectly sums up what to expect in the following hour and fifty-one minutes of this film – an eery screech, a telephone, a scream, a slicing knife. Within the first twelve minutes, we have the introduction of our masked killer on a murderous rampage and two of the seven shocking deaths. The simplicity of it all is profound and screenwriter Kevin Williamson is a master. He crafts interesting characters that we root for, or against, while providing a plethora of juicy reveals, cheeky charm, and a venerable wit to create a film that reinvented a struggling genre. Maybe most importantly for a notoriously devoted audience, his reverence for horror movies past is clear.

Pairing Williamson with director Wes Craven proved to be a perfect fit. Craven’s seminal works were legendary in the horror genre. From Last House on the Left to A Nightmare on Elm Street, he helped define the slasher film and his no fear approach brought a freshness to the production. As indicated by Steve’s death in the first minutes (where prominent are the sounds of cutting flesh and the sight of his insides being torn out), we instantly know that Craven is not going to be afraid to highlight the blood and guts of horror. 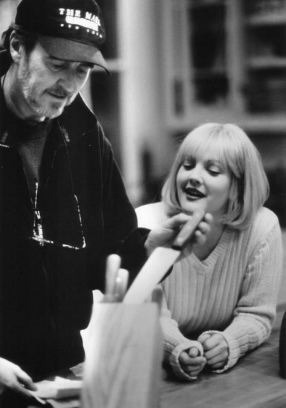 Scream presents a wonderfully dysfunctional group of friends to remind us that atypical is much cooler than being clinically popular. Much credit goes to each of the actors who gave these characters life, in performances that must have made Jamie Lee proud. There is Drew Barrymore who realistically conveys the horrific emotion and breathless disbelief without a twinge of falseness and Neve Campbell, the perfect combination of innocence and badassery. Skeet Ulrich expertly portrays Billy as the dreamy, but emotionally clueless bad boy and we are heartbroken once his psychopathic tendencies emerge. In Dewey, David Arquette offers the right mix of naivety and unsuspecting charm and Courtney Cox shines as the narcissistic and self-absorbed newswoman that we love to hate. Add to die for cameos (pun intended) from Linda Blair, Henry Winkler, and Wes Craven, and it is a dream cast.

Me and ‘Deputy Dewey’

Originally entitled Scary Movie, Williamson included treatments for two sequels in hopes of piquing interest in the franchise. In the film that would come to be known as Scream, he writes smart characters wrapped around a perfectly crafted whodunnit story line that transformed the historical one dimensional victim in horror films and modernized what had by then become a stale and formulaic movie experience. And for that, we owe him a debt of gratitude.

Fun facts that helped make this movie a classic:
The reverence for horror movies past — The following films are mentioned in some form throughout — The Exorcist, Halloween, A Nightmare on Elm Street, Candyman, Prom Night, Evil Dead, Hellraiser, Terror Train, Silence of the Lambs, Psycho, The Bad Seed, I Spit on Your Grave, The Howling, The Town That Dreaded Sundown, Friday the 13th, Carrie, The Texas Chain Saw Massacre.

The rules – Without a trace of contempt, Williamson shrewdly and cleverly turns his admiration for the genre into a succinct formula when he lays out the rules that one must abide by in order to successfully survive a horror movie. Horror fans can relate and he has simply put to paper what a good many of us have inevitably screamed at the screen. It is here when we know that he is one of us, and that he respects us.

1) You can never have sex. Sex equals death.
2) You can never drink or do drugs. It’s the sin factor, it’s an extension of number one.
3) Never, ever, ever, under any circumstances say, “I’ll be right back.” Because you won’t be. See you push the laws and you end up dead.